To share your memory on the wall of Thelma Bolling, sign in using one of the following options:

On December 17, 1946, Thelma was united in holy matrimony to the late Edward Bolling. Immediately, after they married, the couple moved to Mamaroneck, NY, where they resided for four years. They were members of First Baptist Church. In December 1950, the couple bought their first home located in Greenburgh, NY, where they resided for 30 years. The couple joined Union Baptist Church, where Thelma taught Sunday for many years and served as a deaconess. On August 1, 1980, Thelma & Edward purchased their second home, and moved to Chesterfield Co., VA. The couple became members of Morning Star Baptist Church, where Thelma regularly attended Sunday School and served as a deaconess until 2007. In 2008, she was one of 60 congregants who started The Star Fellowship Baptist Church in Richmond VA. Thelma moved back to Greenburgh in October 2014 to live with her two daughters and her granddaughter when her cognitive functioning began to decline.

Thelma worked at Sloanes Furniture Store in White Plains for nearly 30 years. She began her tenure as a switch board operator, but eventually became the office manager. She retired from Sears Service Department, Richmond VA in 1995.

Among Thelma’s greatest joys was serving in the church, being civically engaged, and encouraging and supporting family and friends. As a Greenburgh resident, she was an officer and active member of the Fairgrounds Neighborhood Association. For more than 50 years, she was a poll worker. And while her daughters were in elementary school, she was an active member of the Parent Teachers Association. Thelma enjoyed yardwork and gardening. She also enjoyed sewing and crocheting. Her favorite hobby, however, was reading. Thelma also loved young children and babies.

The Entire Staff of Lee's Funeral Home, LLC respects that the family of Thelma Bolling entrusted the care of their loved one to us, and that they value the level of service & attention our funeral home provides. We are honored, in turn, to provide comfort, assistance and service to the Bolling family during their time of bereavement.

Graveside Services & Burial will be on Monday April 26th, 2021, meeting at 1:00PM. You may meet at Kensico Cemetery office on Monday at 1:00PM; otherwise a Livestream of the service is available & the clickable link is herein where it says WATCH VIDEO. Please be mindful that we're only just arriving at the cemetery at 1:00pm & then need to check-in, be lead to the grave & set-up, so please be understanding to not expect to actually see the start of any services until probably sometime between 1:15-1:30pm or so. Thank you in advance for your understanding & patience.

Please leave written condolences now herein on the Memory Wall to express your sorrow, share your memories, and as an expression of sympathy & way to communicate with/offer comfort to the family, that they and others may see, and may be a lasting tribute in her honor, whether you're able to attend or not. Definitely Please SIGN IN on the Memory Wall as a virtual way of signing a guest book & sharing with the family.

In LIEU of flowers, the family suggests a contribution may be made In Memory Of Thelma E. Bolling to The American Heart Society &/or a Multiple Sclerosis organization (may be done on your own or also be done through any of the donation tabs/links here in website at the bottom of this page); and/or you may choose to plant a tree in her name/memory/honor as another lasting tribute. If flowers are sent despite the family request, they may be delivered either on Sat. April 24th or Sun. April 25th, 2021 by/before 6:00pm, or Mon. April 26th by/before 12:00noon to Lee's Funeral Home. The Family Thanks You!
Read Less

To send flowers to the family or plant a tree in memory of Thelma Elizabeth Bolling (Roney), please visit our Heartfelt Sympathies Store.

We encourage you to share your most beloved memories of Thelma here, so that the family and other loved ones can always see it. You can upload cherished photographs, or share your favorite stories, and can even comment on those shared by others.

Posted Apr 27, 2021 at 07:13pm
So sorry to hear of the passing of your sweet Mom - she always greeted me with a hello and smile at TDYCC - May she SHIP and much love too her family - Patricia Hughes-Perry
Comment Share
Share via:
KJ

Posted Apr 26, 2021 at 05:37am
To the family,
Precious memories, how they linger, how they ever flood my souls...this describes how much I shall cherish my memories of “Mother Thelma Bolling.” Her love & concern for others extended far beyond her immediate family. I think of her as being a “Greenburgh/UBC, Village Mother.” There’s so much I could say...Imani & Gail, thank you for allowing me to be somewhat of an older/big sister, sharing a special bond & love with your mother. She was a dear friend to my mother. Whenever my mom visited my brother in VA, she & Mother Bolling either got together or spoke on the phone. I shall miss her beautiful, warm smile as she would greet me whenever & wherever we met. Imani & Gail, (and family) you were a extraordinary example of “love.” May the peace, love, and comfort of our loving and faithful Father God, continue to bless, keep and strengthen you.
Prayerfully submitted w/love,
Karen Thomas Jenkins
Comment Share
Share via:
LC

Posted Apr 24, 2021 at 03:22pm
To the family of Deaconess Thelma Bolling,
On behalf of the Deaconess Ministry of Star Fellowship Baptist Church, we were sorry to hear of Mrs. Bolling's passing and we extend our deepest condolences. She was sorely missed when she left Richmond and relocated to White Plains, New York. Her actions and commitment left an indelible legacy within our Deaconess Ministry. She was extremely meticulous, dedicated to her duties and especially helpful to our new members. Thanks to the family for allowing us to be a part of her life for as long as we could.

Posted Apr 24, 2021 at 12:57pm
To the family. IMANI AND Gail. I have and will always remember your Mom. One of the best Sunday School teachers at UBC. Mrs Bolling was your mom and everybody else. I will always cherish my memories of a wonderful women of God
May you always know you are blessed to have had her and me also. Love Vicki Fields Thomas 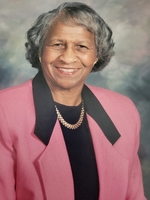